Survival Guns on a Budget

I was asked by the boss to write an article on which survival gun I’d have if I could only afford ONE. When I was given this assignment, the first thought in my head was, “Gee, that’s kind of tough, I’ve never been a one gun household!” So, I thought and pondered, wondered and considered, came down to three options, and then weighed them out and came down to one.

I’ll present all three survival guns to you, and let you decide for yourself, but still stand by my own decision. I came to my decision based on 3 criteria: cost, portability, and availability. My decision will definitely bring some criticism, and may even shock some folks. Once you make your decision I suggest getting a red dot magnifier to make the most out of your gun. 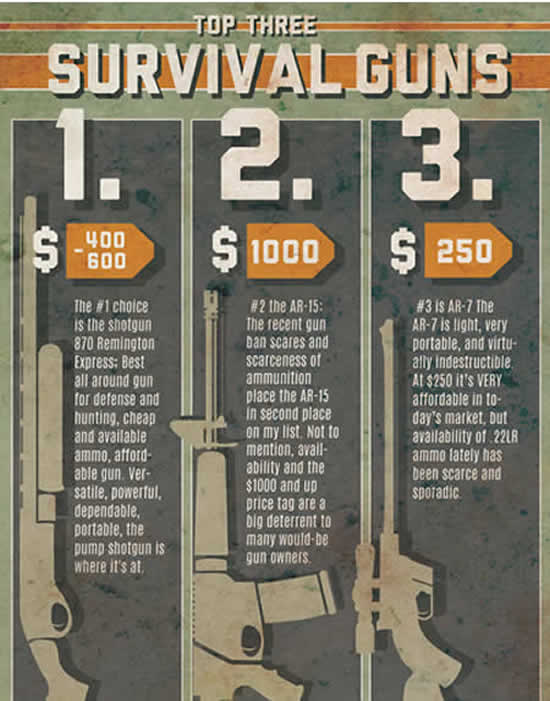 The AR-7 as a Survival Gun: Third Choice

First on my list for a survival gun was the AR-7, a fine little firearm with some unique characteristics I will describe, along with its drawbacks. The AR-7 was designed to be a survival rifle from the word “GO”. Developed for use by the U.S. Air force as a survival tool for downed pilots, it was originally presented to the public by Charter Arms. That variation, in my opinion, was its best incarnation.

The AR-7 is light, very portable, and virtually indestructible. I had one as a kid, and brought down many a rabbit and squirrel with it. It may be a little light in a combat situation, but remember the article was about SURVIVAL, not gun fighting! Its cost is one of the more attractive things about it; at $250 it’s VERY affordable in today’s market.

The AR-7 has one very unique characteristic in that ALL its components break down and slide into the butt stock. This, combined with its light weight, make it an EXTREMELY portable survival gun. It shoots the venerable .22 LR out of a semi-automatic action, and is surprisingly accurate. (You wouldn’t think this possible out of a rifle you tear down every time you finish shooting it.) As a side note, it also floats!

All of these features make the AR-7 a desirable rifle, but availability of .22LR ammo lately has been scarce and sporadic, thus, making this rifle third on my list.

The AR-15 as a Survival Gun: Second Choice

Next on the list, and I will catch it if I don’t mention it, is the AR-15. The AR is a spinoff of the M16 designed by Eugene Stoner, and originally produced by ArmaLite. It was introduced and HATED during the Vietnam War. (I still have many Vietnam Vet friends that spit at mine as they pick up their M14.)

They were problematic and considered unreliable. They have since been refined, and are produced by many manufacturers. I have owned many and they are damned all handy for medium game at medium ranges. Mine have brought down many razorbacks here in my home state of Oklahoma.

Those who ask, “What do you need an AR-15 for?” are idiots. Apparently they have never been in a tree surrounded by pissed off hogs with 4” teeth, wishing their magazine didn’t hold just thirty rounds but sixty! The AR-15 has proven itself as a combat weapon and survival gun, and can bring down most everything edible in North America except for the largest of game.

When I lived in Colorado, it was useful for antelope, deer, coyote, many varmints, and everything up to and including elk. After elk, forget it. They are considered marginal for bear and completely useless (unless you are some sort of super marksman) on moose.

The recent gun ban scares and scarceness of ammunition place the AR-15 in second place on my list. Not to mention, availability and the $1000 and up price tag are a big deterrent to many would-be gun owners.

My final offering, and the one I consider first place on MY list of firearms I’d have if I could afford just one, is the pump shotgun.  More specifically, the 870 Remington Express in 12 gauge. The 870 is a widely used and widely available firearm. Its cost, beginning at $400, coupled with its versatility, portability, access to ammunition, and reliability make it first on my list of must have survival guns on a budget.

The 870 is offered in many variations; marine grade stainless, the “Wingmaster” presentation grade, the Express, all good firearms. But, as a survival gun that is going to be used in the field, you just can’t beat the plain Jane, no frills model… the Express. Its flat finish makes it less detectable due to the lack of reflections it puts off. It is the cheapest of the 870 line, and has MANY aftermarket retrofits, readily available.

The Remington 870 Express has brought down many game birds over the years, all the way up to and including turkey. I use #6 shot for upland birds, and #4 for turkey here. “But what about larger game?” you ask. Well hold on, it’s coming. The 870 Express can also be loaded with buckshot, slugs, sabots, dragon’s breath, flechettes, and just about anything you can stuff into a 12 gauge shell!

I can use buckshot in wooded areas for deer and game up to and including bear. (Yes, I said bear! I have a friend in Alaska that runs a fishing guide service and carries a 12 gauge just for bear encounters.) And, slugs are effective killers for shots up to 100 yards with a little practice.

As a combat piece, the pump shotgun is FEROCIOUS! It was banned from war by the Geneva Convention. The Germans were terrified of it during the trench warfare of WW1.

Think about it, one 12 gauge shell loaded with #0 buckshot puts out 9 .30 caliber balls with a single pull of the trigger. With a magazine extension, which is easily installed, you can put 72 .30 cal slugs down a hallway VERY quickly. I can run a slide back and forth mighty quick when scared! Our illustrious Vice President had it partially right when he said, “Just grab a shotgun…” stop right there Joe, you’re winning.

Another thought, in a home defense situation the pump shotgun is IDEAL. Spray a couple rounds down a hallway; I promise you, you WILL get results! If it’s 3 am and a break in happens, you are NOT thinking about sight alignment, squeeze trigger, recoil control, or any of that. Your main focus is to blast down the hallway repeatedly and rapidly.  I will always recommend a shotgun for home defense….ALWAYS.

This comes as surprise to many who used to walk in my shop, see a bunch of pistol trophies and ask for something for home defense. I’d casually walk over to a corner; grab a shotgun, and say, “Something like this.” The looks were hilarious. “But you’re a pistol guy Ed!”

In a home defense situation, a pistol is a secondary choice. Colonel Jeff Cooper, a personal hero of mine was quoted as saying, “A pistol is what you use to defend yourself until you can get to a rifle to fight with.” Or, in the case of home defense, a shotgun.

In conclusion, my choice of most bang for the buck in a survival weapon is the 870 Remington, which the “guv’mint” has not yet threatened to ban nor is there an ammo shortage….yet. Versatile, powerful, dependable, portable, the pump shotgun is where it’s at!