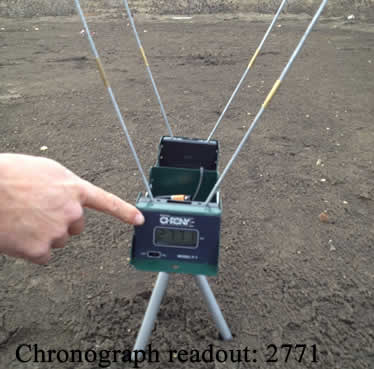 Part three of our series Reloading the 5.56 NATO (.223 Remington) covers testing the completed rounds with a shooting chronograph, building a ballistics table, and testing terminal ballistics. Read Part One and Part Two if you want to start at the beginning.

So, on the last occasion of our meeting, we had a completed round built and were waiting to go play with them like a kid on the last day of school. We will do so in this article, also gather up some scientific data, and create a ballistics chart for our newly built loads. (This is the fun part where we combine math, physics, science, and shooting!)

*Reloading ammunition is a skill and an art. We suggest anyone interested in reloading train with a professional first.*

How a Shooting Chronograph Works 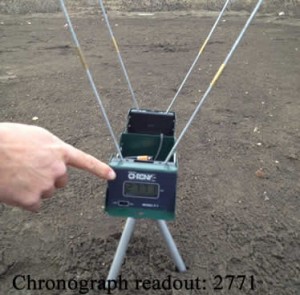 First test we will do, the chronograph. A shooting chronograph is a MUST if you plan to do ANY serious load development on your own. Its function is to clock the blazing speed of the bullet as it travels over a set distance.

Mine is a Shooting Chrony model F1. It’s a pretty basic model of shooting chronograph, gives a digital speed readout of a bullet, arrow, rock, or any damned other thing you can launch through it.

As our slug passes through the plane of the laser, a timer starts; as it passes the back plane, it stops.

The machine then calculates the time into a readout in FPS or feet per second. This is a critical measurement in ballistics. My machine has a port for a printer and all that jazz, but on the range, I forgo the fancies. 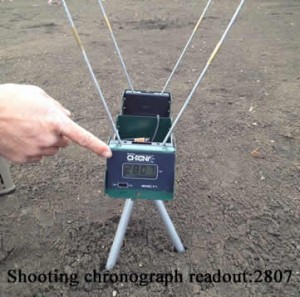 The procedure for chronographing a load is to shoot a few shots through it, called a string, and average the string to get a final number. The closer your numbers in your string, the more consistent your rounds are going to shoot and thus, more accurate.

Remember, firepower is NOT how many or how big of a round you can put downrange, but put downrange ACCURATELY.

CONSISTENCY is the key to accuracy! If you know your rifle shoots right 3’ at 400 yards EVERY time, you can adjust your optics to compensate.

Our loads turned out pretty danged consistent. I used a 3 shot string, and you can read the readouts below to see if we come to the same answer.

I’ve run factory ammo through the machine, just playing around, and gotten variations of over 100 FPS. THESE ARE THE GUYS THAT MAKE IT EVERYDAY! .22 is the worst in terms of variance.

Anyway, we have our three numbers; add them up. This gives us a total of 8349. Now we divide this number by the number of shots in our string, 3. This gives an average of 2783 FPS.

Not a blazing speed as .223 rounds go, but we were shooting out of a short barreled M4, thus giving up muzzle velocity for portability. And, it gives us a starting point for future load development. (.223 is capable of speeds up to 3000 FPS in a 69 grain bullet and still not overpressure the barrel. We have a fairly respectable round here.

Next order of business is to take the data we have and build a ballistics table with it. We have a constant mass of 69 grains, and an average speed of 2783 FPS. From this, we can calculate energy delivered on target with each slug by using this formula:

Now we have the two basic components we need to build a ballistics table for our load. Muzzle velocity and Muzzle energy. (2783FPS and 1187 FT/LB is pretty destructive on target as we will see later.)

We can take ballistic coefficient and sectional density of our bullet along with some set constants and create a predictable path our bullet will take down range, provided we are dealing with no wind and ideal atmospheric conditions. I’ll save you the boring explanations and just present the chart to you.

This chart will predict bullet drop, which is very important when lining up a shot. I only went to 500 yards, as I feel it is not real ethical to take shots out much past this range with such a small bullet. (Sorry, don’t really mean to impose my views, but it is also a lot of math to whip these charts up.) As we can see, the slug REALLY loses energy and speed as it travels down range and has some SERIOUS drop between 400 and 500 yards.

Now, on to the fun part! I like to test terminal ballistics also. (This is what happens when the slug hits the target.) Most serious ballisticians use ballistics gel. This is a Jell-O like substance poured into a block and used to measure penetration, bullet frangibility and such.

Since it smells like pee, stinks up the whole damned house, and is expensive, I opted for head sized watermelons for this test. (Besides, watermelons give a more graphic and fun idea of what your slug is gonna do downrange.)

It has been reported that a watermelon has similar characteristics to the human head, thus it is not a difficult transition from a melon in the attached video, and a bad guy. The results at about 25 yards are EXPLOSIVE! Hopefully, we have created the building blocks and sparked an interest in ballistics, loading, and shooting with this project.

But most importantly, I hope that you, the reader, will have a grasp on the concept of what that slug you released from your barrel, sent downrange, struck the target (hopefully) and brought it down, does on impact. I further hope you have a clearer understanding of what it takes to cause the delightful “BANG” noise our beloved guns make when we put our booger hooks on the bang button.