Instead of diving straight into the survival knife reviews, let’s start with something very basic – what a survival knife is for. Most everybody knows that survival knives are fairly large, arguably around 6 to 8 inches in blade length with relatively thick blades and sturdy construction.

They need to be strong and versatile; after all, they’re for survival, which can mean just about any kind of use. In fact, the many uses of a survival knife differentiate it from other kinds of knives.

There are an almost unlimited number of uses for a knife, although boiling them down into named types, such as splitting or slicing, there not quite so many. Still, unless you’ve handled a knife, especially a survival knife for a considerable amount of time – and in the wild – you may not realize all the potential uses. Here’s a list, some familiar uses, some not. A survival knife can perform all of them, although not always well.

Cut – Obvious and forever popular use of a knife, a truly sharp knife can cut an amazing number of materials. A survival knife, properly maintained, is a formidable cutting tool.

Slice – A slice is a lot like a cut, but different.

Pierce – There are many situations where making small holes in materials is useful. It’s usually a controlled, non-violent action, which may distinguish it from stabbing, cutting or slicing.

Whittle – Whittling relates to slicing, but it usually implies wood and controlled strokes like sculpting. Survival knifes are big for whittling, but they’ll do the job.

Pry – People use Survival knives to pry things apart. It’s not recommended for survival knives as the unusual torsion can damage them, especially tips and edges.

Shave – Of course, you can shave with a big knife, ever seen the Crocodile Dundee movie? (Qualification: it ought to be a well-sharpened knife, razor edged, so to speak.)

Spread – Just a bit different from prying, especially when it comes to butter or jam.

Dress – Almost any knife can dress or butcher meat, but as a rule, the big survival knives are thick, heavy and awkward for dressing all but the largest pieces of most carcasses. It works best in the field, not in the butcher shop.

Fillet – Using a knife to fillet something, usually fish, is an ancient practice – and it does take practice. It’s a form of slicing with a horizontal cut between layers, which takes skill and a very sharp knife to do well. Most specialized fillet knives are thin bladed, which obviously leaves out the survival knife; but it can still do the job.

Skin – Separating an animal from its skin is probably one of the most common uses of a survival knife. Although it’s a relative of filleting, skinning doesn’t usually need thinner blades.

Chip – Using a knife to chip stuff is usually a great way to make it dull, but people chip ice and other semi-hard substances with a survival knife all the time.

Dig – Digging with a knife is inefficient and generally bad for the blade, but in a lot of terrain, it works and is a lot easier on the hands and fingernails if you don’t have a camp shovel.

Scratch – Sometimes related to digging, scratching with a knife is making a shallow groove with the fat curve of the blade.

Stab – Another traditional use of a knife, a favorite of dramatists, and one of the things a survival knife can do well.

Scribe – You can use the point of a survival knife to scribe lines and marks into many types of material. It can be very precise; in fact, some expert woodworkers use Survival knives to make cut lines better than any pencil.

Pare – Paring a pear with a survival knife is clumsy, but it works. A better idea is to use something smaller like a pocketknife.

Batoning – Drum majorettes or symphony conductors do not practice batoning; using a big survival knife, batoning is splitting logs by putting the blade edge on a log end and smacking the spine with another log. It can work well with some kinds of wood, especially dry hardwoods. However, as with any striking of a knife, there is a risk of breaking the blade. 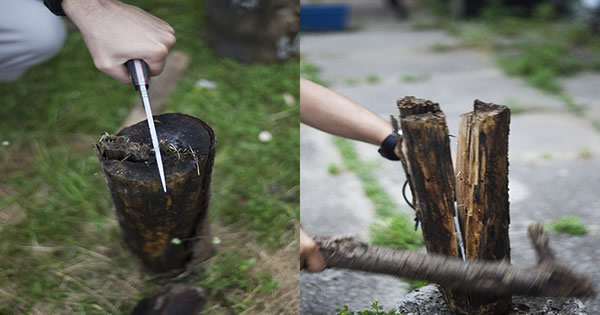 Stake – In an emergency, a big survival knife makes a great tent stake; but there are better ways to stake a tent if time allows.

Flip – A spatula flips a pancake better than a knife, but who wants to carry a spatula in a bug out bag? A survival knife has the blade width to be a reasonable spatula.

Hammer – Hammering with a knife is usually a no-no, but leave the sheath on and strike with the pommel (heel) of the handle (if you must). This is not the kind of hammer that makes you think everything is a nail.

Sterilize – This may seem extreme, but it is a simple method to heat a knife until almost red-hot and apply it to wounds for sterilization. You’ve probably seen it in movies; it works in real life too but to do a thorough job it’s not quick or pretty.

Fire starter – Get a ferro-rod (a ferrocerium flint), some cotton balls soaked in petroleum jelly and strike sparks with the steel of your survival knife. It’s almost a sure fire method.

Throw – Don’t try knife throwing at home, especially for targeting living things. Throwing knives, especially survival knives, is more difficult and even more dangerous than it looks – among other things, knives, like bullets, can also ricochet. Leave this to specialists using special knives (or become a specialist yourself; just not with a survival knife).

Poke – Exploring things by poking them with a knife is a time-honored method, especially for small slow-moving critters and suspicious materials, but serious thrust poking is dangerous – your hand could slip onto the blade. Forceful poking can also result in broken knife tips.

Fight – Fighting with a knife, like throwing one, is best with knives designed for it. Experts (the only kind you should be to fight with knives) use small, light knives for quick movement, which does not describe the heavy, thick-bladed survival knife. Of course, in a survival emergency….

One point of this list is to remind people, even those who use of a knife is habitual, that a good knife is always a multi-tool. A survival knife is a big multi-tool, suited for a number of jobs that you wouldn’t want to belabor with a pocketknife.

Another point is that in order for a survival knife to do all these things (and more), it needs to be a good survival knife – and that’s the topic beginning in the next Survival Knife 101 article.